By now, most of you will have heard that a previously unknown far-right group has called a demonstration in Brighton on June 4th.

South Coast Resistance, the group calling the demonstration, has stated that they oppose “Brighton & Hove council secretly housing hundreds of refugees while ignoring homeless on the streets”.

But who are this group, why are they really coming to Brighton, and what can we do about it?

Fascists being outnumbered on a previous trip to Brighton.

END_OF_DOCUMENT_TOKEN_TO_BE_REPLACED

Good to see everyone who came along to share food, cups of tea on the Level and spread some anti-racist solidarity on The Level. Thanks to all those who made the bright bunting and to the Re-Making Picassio’s Guernica banner-makers. Last year the banner led a Migrant Solidarity bloc to the seafront to protest against March for England’s fascist parade. It was great to see it again.

Our international picnic is approaching. We’ve located teas from all across the world. Kitchens are all ready to pop-up. We will all be on The Level on Sunday come rain or shine. See you there.

A community celebration of resistance to racism and fascism in Brighton.

For the last few years, the people of Brighton have stood together against organised fascists, particularly the EDL, who have tried to use St George’s Day with its crusader imagery to promote forms of religious and ‘race’ hatred. We have successfully turned this march away and this year we holding our own event:

Everyone welcome, all communities, all peoples

In a victory for community-based anti-racism, the far-right English Defence League (EDL) have announced that they have ‘postponed’ (ie cancelled) their planned march in Brighton on April 18th. It is clear that the threat of a large, diverse counter demonstration from the residents of our city was too much for them, and they have chosen to attempt to march in other cities, that they believe they can bully more easily. This victory clearly shows that communities do not have to put up with these racists, and that they will back down if it looks like they will be given a hard time.

Screenshot showing the EDL’s announcement on their facebook page.

However, StopMfE urges anti racists and anti fascists not to rest on their laurels. The situation could change and we are committed to opposing the EDL if they ever do raise their unwelcome heads in our communities! Watch this space for more info.

The far-right English Defence League have announced a national demonstration in Brighton on 18th April 2015. With no Islamophobic issue to hang their demo from, it is clear the EDL simply want to cause trouble for the residents of Brighton because we are a tolerant and diverse community that has successfully defeated the racist March for England.

EDL in Brighton on a March for England a few years ago.

StopMFE are disappointed that the EDL have decided to bring their drunken, racist caravan to Brighton. In previous years, Brightonions have risen to the occasion brilliantly in successfully seeing off the March for England with colourful mass demonstrations and blockades. We call on all the vibrant communities of Brighton to unite and stop the EDL’s message of hate. 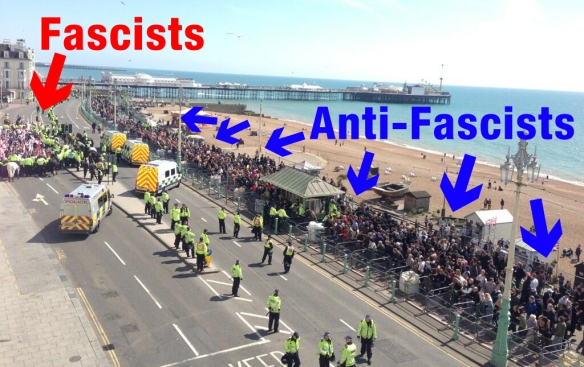 The March for England have a crap time in Brighton, 2013.

Brighton anti-racist campaigners were left cautiously jubilant this morning with the March for England’s Facebook announcement that they will not be returning to our town next April.

Tony Campbell of STOP THE MARCH FOR ENGLAND said “We welcome the news that next year’s St George’s Day will not be marred by gangs of racist thugs marching in the streets of Brighton. This is a victory for a city that was prepared to come out and defend its reputation for tolerance and diversity. We will offer our support to anti racists in whichever city or town the March for England chooses to afflict next – if they change their minds then we are ready” 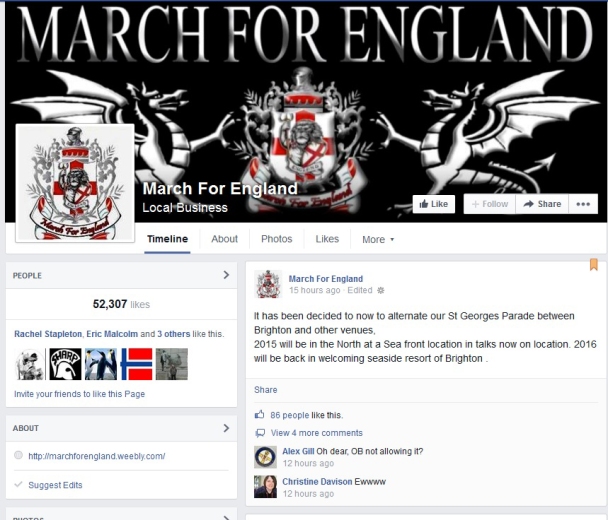 At the lively protest against UKIP in Hove on Tuesday, StopMfE activists heard about an election meeting in Patcham at 7.30pm Thursday 15 May at Memorial Hall Old London Road Patcham Village, BN1 8XR.

Anti-UKIP activists sent us a message for distribution… 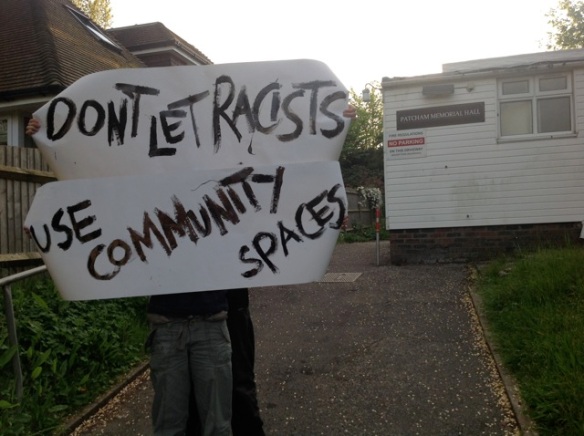 The (undeniably) racist UKIP are holding a meeting in Hove on 13th May where their two South East MEP candidates are due to appear. Their previous two meetings in our local area have met with sizeable and vocal protests, let’s make it three in a row. StopMfe is asking its activists to be there:

Their meeting is due to start at 7pm, so get there at 6.00pm in time to make our protest effective.

If you want to see more destroyed UKIP posters (and enjoy looking at the creativity of anti-racism and anti-facism) click on http://destroyedukipbillboards.tumblr.com/

Stopmfe would like to thank everyone who came out to oppose the March for England. The crowds of anti-racists and anti-fascists along the seafront vastly outnumbered a fascist march whose numbers have now fallen to less than one hundred. We estimate that over a thousand raised their voices and held their placards high in the area the police designated for protest with a Section 14. There were also hundreds of anti-fascists trying to block and challenge fascists as they assembled and dispersed from their seafront route.

March for England proved again to be an aggressively fascist affair. The pretence about celebrating St George’s Day, which never really held up, has been dropped for the thuggish stance of far right nationalists against anti-racists. Brighton, the ‘liberal capital’ of Britain, is their target because it is a place that embraces difference, where tolerance of all peoples, including migrants, is a civic virtue. We would like to think so. But, it was more noticeable this year as Stopmfe leafleted our city that March for England was taking place while racism was being mainstreamed. Just a peak at the posts by MfE supporters on The Argus blog show how many old school racist stereotypes have been dusted off the shelf and are back in use. Laments about loss of English culture are simple a reactionary attempt to turn the clock back to the mythical time of an entirely white society.

Of course, there were confrontations when March for England arrived in Brighton.  Ignoring fascists is not option, at least not for those refuse to deny history. The big question about the rise of Nazism in the interwar years is always: why did people let it happen? Why did they wait for the terrible consequences of hatred of others to unfold? Let’s not just witness racism worm its way back into our communities; let’s not just watch fascism grow again. In true Brighton style, opposition to March for England was wildly diverse. Hats off to the man who stood on a rooftop playing a single note on a trombone. Great admiration for the beautiful banners: the rainbow colours of “Racists go Home” floating from a hotel window and the pink and silver of “This is Anti-Fascism” wrapped around the Clock Tower. Respect, too, for those who stood their ground as drunken fascists threw tables and chairs from one Brighton’s best loved pubs at them.

There were many different experiences of Sunday 27 April. Stopmfe has been gathering peoples’ views. Here’s a few.

View from crowd behind the police barriers: “There were definitely less of them, less March for Englanders, than last year. Those flag waving bullies were humiliated. You could see that, especially when they just turned around after a few yards and retraced their steps.”

On the seafront: “Has the message got through yet? We’re at risk of getting bored saying it year after year. I wouldn’t want to sick them onto any other place but they should fuck off from here. Can I say that?”

Top of Queens Road: “I don’t understand why half million was spent fortifying the seafront for a march that took a maximum of thirty five minutes, and that was dragging it out, then the fascists are just let loose on our city afterwards. Who thought that was a good idea?”

The North Laines: “For sure this was a day of anti-fascists versus fascists but to all intents and purposes it also looked a struggle between a young generation and an old one. Young people, female, male, whatever, were standing up to a bunch of middle aged men who had too much booze and we’re trying to relive their 1970s.”

We are collecting your accounts and your tweets, blogposts, photographs. Send stopmfe@ymail.com those you want to share and we will collate them. ID protected as always.

StopMfE
Create a free website or blog at WordPress.com.